Another day at Cocoa Beach

Work is progressing smoothly on the Cocoa Beach shirt.  I supposed it's true of all sewing, but the more shirts one makes the easier it gets.  I just sort of blow right through things that used to leave me either scratching my head trying to figure out, or just plain paralyzed with fear.  I did spend a considerable amount of time cutting out the fabric.  If all goes well the pattern should match at the front.
This is a pretty basic shirt with a yoke.  On a plaid, or a blocky print like I'm using, it's easiest to cut the yoke on the bias.  This eliminates the whole matching issue on the back.  I'm also skipping the patch pockets which I think would detract from the overall look. 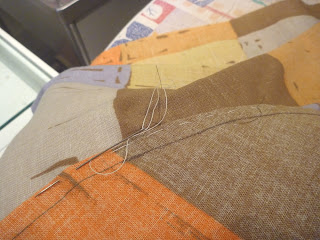 All the seams are flat felled.  Because I don't have a felling foot, I make the seam on the inside of the garment.  After the seam allowance is pressed over I like to baste it in place.  I then turn the shirt right side out and topstitch 1/4 from the seam using my presser foot as a guide.  The basting holds everything in place and I don't end up with any bunching up of the seam. 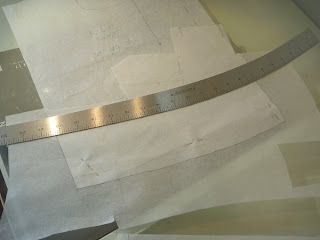 I had to do a little pattern making today.  This shirt carries a 2.5" hem.  If I had kept the bottom edge of the shirt straight it would have been very simple.  But because I curved the fronts I was worried that the hem would be a big mess.  So I decided to make shaped facings for the lower edge of the shirt.  My Swedish tracing paper made this very easy to do.  Here I've just placed a scrap over the front pattern piece and with my hip rule I've duplicated the curve.  There will be some extra bulk at the lower edge but the inside of the shirt should be neater.  That's a trade-off I'm willing to make. 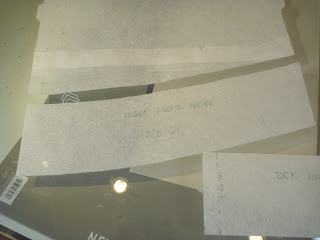 So here's one of the new facings. The left and right fronts are different sizes so they require their own facings.  I also write instructions to myself on them, namely which side has to be up when cutting.  I was really short on fabric and had to scrounge for scraps.  Thankfully, the facings don't have to match anything. 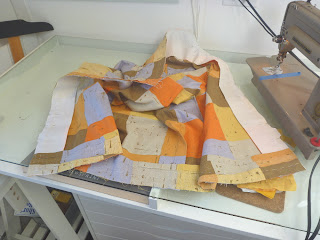 Here is the whole shirt ready to have the collar and facings attached.  I pinned and then basted (of course) everything together.  The entire perimeter of the shirt was stitched and then all the seams were trimmed.  This is a good place to stop for today.

Posted by Mainelydad at 7:50 PM