How to stay busy while the fabric is at the drycleaners 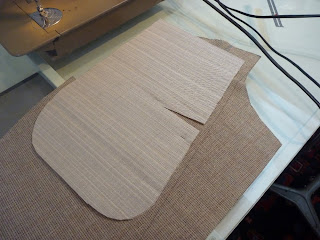 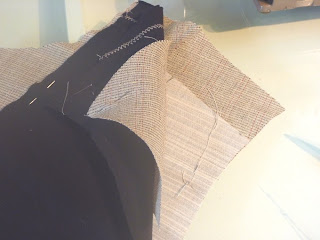 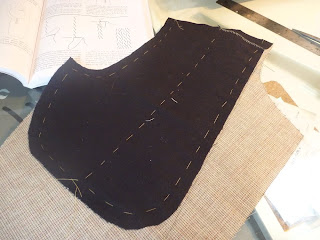 My linen has been renamed a "tablecloth"  by the cleaners, and it will be ready in about a week.  In the meantime I'm moving forward by "preparing the canvas."
Canvas is the name given to the understructure of the jacket.  It's composed of layers of different interfacings intended to give the jacket shape and also reduce wrinkling and stretching.  The process is described step by step by Mr. Cabrera.  A base of wool canvas is cut 1/2" larger than the jacket front piece.  A piece of hair canvas is cut to a specific shape and placed over the upper chest.  This is known as the "plastron" or shield.  Over this is layered a bias strip of French canvas.  My French canvas from Steinlauf & Stoller is a fusible, so I substituted another layer of wool canvas.  The whole mess is then covered with cotton flannel and basted into place.
Of course, it's possible to buy a ready made jacket front for about $10, but to have something custom made is completely intoxicating.  I loved every bit of this process (even though I totally screwed up my first attempt!)  The next step is pad stitching the plastron into place, and that deserves a post of its own.
Posted by Mainelydad at 3:59 PM