After cutting out the lining I held the larger pieces up against the wool to get a feel for the eventual weight / substance of the finished coat.  My impression was that it was a bit flimsy, especially considering that I will primarily wear it as outerwear.  I also hate being cold, so I decided to interline the sleeves and the upper half of the coat.  I referred to my Edna Bishop book on clothing construction for instructions.  I've read discussions on other blogs relative to interlining vs. underlining.  Sewists can be very passionate about this topic!  I'm calling it interlining because it's attached to the lining.
My real issue was what to use.  Edna suggests using old blankets which would be way too heavy.  I tried an old flannel sheet and even it felt like overkill to me.  I eventually decided to use some of my old white t-shirts.  It would either work or be the biggest sewing mistake ever. 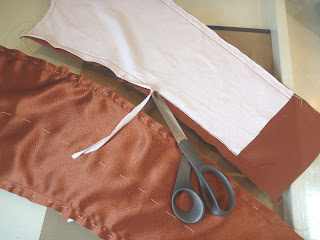 I cut the pieces and basted them carefully to the lining, making sure there were no huge wrinkles.  After basting, the interlining was staystitched to the lining just inside the seamline.  The knit was trimmed as closely to the seam as possible.  As shown in the above photo the interlining in the sleeves ends at the top of the hem.  This reduces the bulk at the cuff.  I then assembled the lining.  I find it hard to keep my spirits up during this process.  It just feels like I'm making the whole damn coat over again. 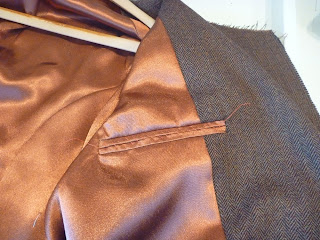 Of course I complicated things even more by adding an inside chest pocket. 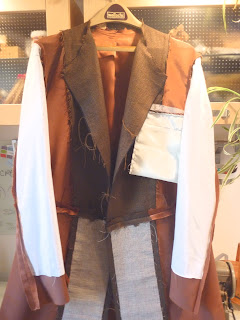 Here's the completed lining.  I added the lower front facings which are interfaced with some strips of hair canvas.  It just seemed odd to have so much structure at the top of the coat and none at the bottom. 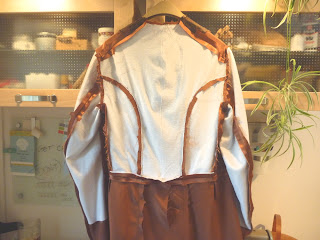 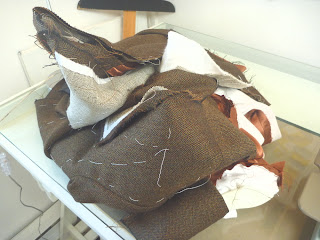 Now I just need to sew this big mess together!
Posted by Mainelydad at 2:47 PM